Back in the day when Innocent was a new business taking the burgeoning smoothie market by storm they became the poster boys for a cool, quirky brand tone of voice.

If I had a fiver for every client who came to us at the time and asked if we could write something for them that sounded ‘Like Innocent’ I’d have squirrelled away, oh, maybe 20 or 25 quid, by now

But given that back then I was creative director at another small start-up that was quite a lot of our client base.

Anyway, the point is everyone from accountancy software companies to mobile phone giants, wanted us to make them sound like Innocent.

Innocent were in your face, optimistic, even a little silly at times. And as a good copywriter I could have a fair stab at emulating their tone and adapting it.

That’s when the fun started.

The client would read the copy and lose their smoothie bottle.

They started thinking, perhaps Innocent isn’t the right role model for selling in the benefits of accountancy software, or phone contracts.

They may have been right. But they’ll never know.

Because to create a truly unique tone of voice, you need to be brave.

Box tickers and bean counters who have to report to grim faced boardrooms around the nation aren’t in the business of taking risks.

And in turn, those boardrooms didn’t want to rock the boat or scare the shareholders.

So, the ‘Make it like Innocent’ briefs were binned and something a little less risky and a little blander took its place.

So, how did Innocent get away with it?

Their secret was that their tone of voice and brand were established when they were still a start-up.

When the owners still actually owned the business, not shareholders.

When the vision of just a few passionate people took precedence over boardrooms and box tickers.

We’re lucky enough to be working with similar brands today, like Gu.

Brands who care about character and work hard to protect and nurture it.

And when you are trying to stand out from the crowd, that makes all the difference. 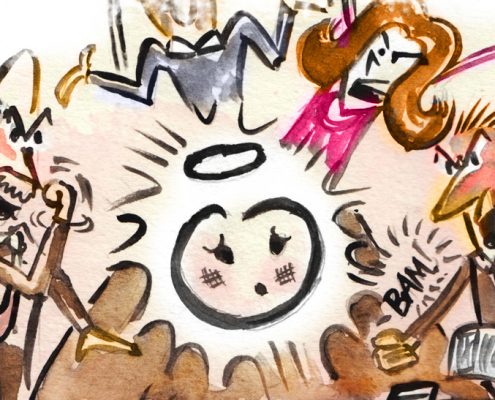 The new normal? We’ve already nailed it
Scroll to top